Granting lease incentives is a common way to encourage a new lessee to sign up to a new lease contract and fill vacant premises. Lease incentives may take various forms depending on the negotiation between the lessee and the lessor.

Payments made by a lessor to a lessee associated with a lease, or the reimbursement or assumption by a lessor of costs of a lessee.

The Standard and the Basis for Conclusions do not elaborate on this definition. In addition, IFRS 16 does not provide guidance on the various types of arrangements between the lessor and the lessee that may satisfy this definition.

In our view, even though not clearly stated, we believe the definition could suggest that an analysis similar to the IFRS 15 ‘Revenue from Contracts with Customers’ guidance relating to the consideration payable to customers could be applied.

Accordingly, any payments made to or on behalf of a lessee within the context of the lease contract should be considered as an integral part of the net consideration of the lease and therefore be accounted for as an incentive. This is to the extent they are not made for:

In addition, we believe the former interpretation SIC 15 ‘Operating Leases—Incentives’, which dealt with such type of transactions under IAS 17, is helpful in delimiting the scope.

SIC 15 stated all incentives provided in consideration of the agreement for a new or renewed lease had to be recognised as an integral part of the net consideration agreed for the use of the leased asset, irrespective of the incentive’s nature or form or the timing of payments. We think this is still true under IFRS 16 and therefore similar accounting considerations with respect to the definition and scope would apply. 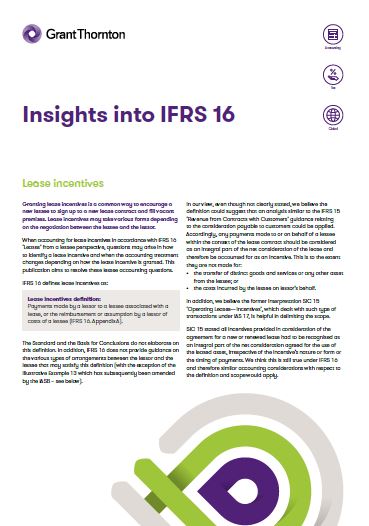