The Individual Accountability Framework - An Overview

By:
Amanda Ward,
Kevin Coleman,
Claire Miller
This is the first article from Grant Thornton in our series on the forthcoming Individual Accountability Framework (IAF). This introductory article provides an overview of the purpose of IAF and an explanation of each of its four components.
Contents

The Individual Accountability Framework regulation is intended to improve executive accountability within the Irish Financial Services sector by increasing the transparency between Regulated Financial Services Providers (RFSPs) and the Central Bank of Ireland (CBI), particularly of where accountabilities lie in organisations. It follows in the footsteps of similar regimes successfully enacted in the UK, Australia, Singapore, Hong Kong and Malaysia.

Why is IAF being introduced?

The idea of an Individual Accountability Regime for the Irish Financial Services sector was first announced in the CBI’s Report on the Behaviour and Culture of the Irish Retail Banks in 2018 following an examination of the Tracker Mortgage issues. There have been several recent incidents such as these in the Irish Financial Services sector where organisations, as opposed to individuals, were sanctioned for behaviour and decision-making that was improper and harmful to customers.

The introduction of a formalised accountability framework will aim to incentivise positive behaviours and promote an improved, more transparent culture within RFSPs. As well as this, the Regulator intends to strengthen its enforcement toolkit, particularly with respect to its ability to enforce its standards against individuals as opposed to organisations only. It is hoped that each component of IAF will promote better outcomes for customers and drive higher standards of behaviour for individuals in Financial Services.

The 4 Components of IAF

IAF contains four key components that RFSPs need to be aware of. Each of these are outlined below. 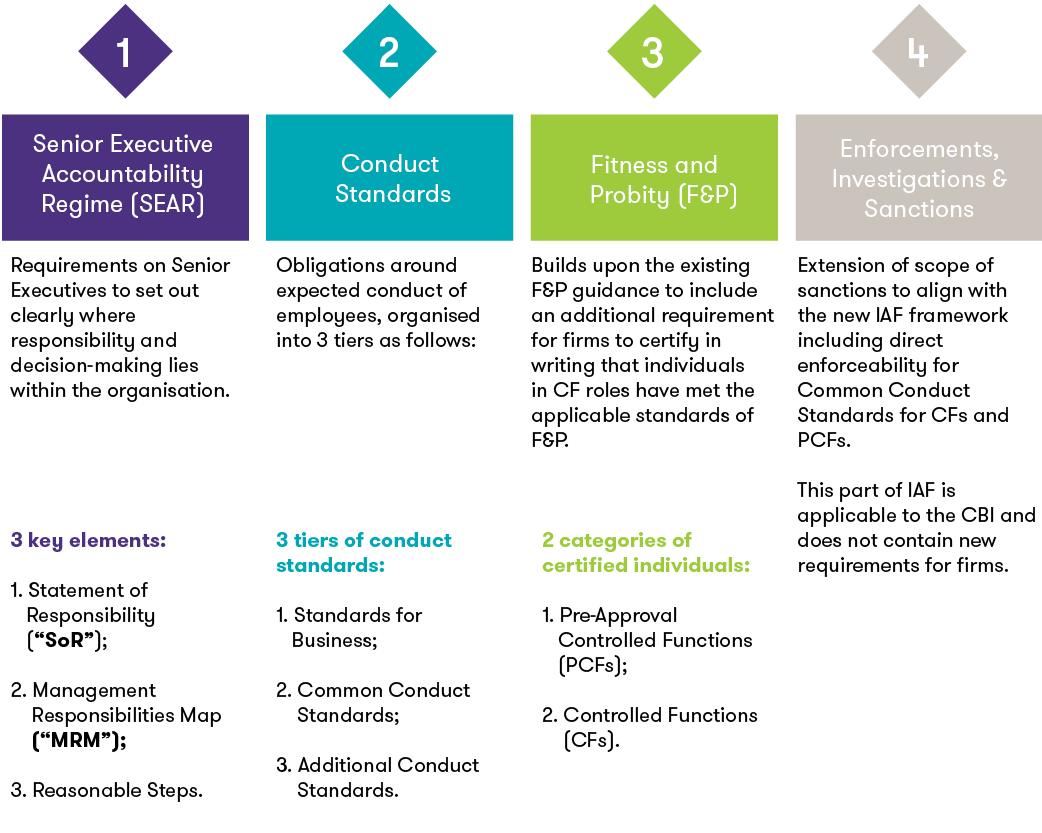 The novel component of IAF is the Senior Executive Accountability Regime (SEAR). Senior Executives currently holding PCF roles will be designated as “Senior Executive Functions” (SEFs) and will be required to have a Statement of Responsibility (SoR) outlining their role and the areas of the business for which they are responsible.

As well as the creation of SoRs, executives will be allocated Prescribed and Overall Responsibilities. This is a list of responsibilities covering significant risk areas typically issued by the regulator. These responsibilities are allocated to SEFs according to their role and this information is documented in the SoRs. This allocation will increase transparency between the firm and the regulator as to who is responsible for what.

When responsibilities have been allocated and an SoR has been produced for all SEF role holders, this information is held in a Management Responsibilities Map (MRM). This document is intended to clearly illustrate the senior management structure across the firm, showing where accountability lies within that structure and how the firm is governed as a whole. It typically contains information such as any matters reserved for the board of an RFSP, the terms or reference for all Board committees and the reporting lines and SoRs of all its SEFs.

SEF role holders will now have a legal duty known as a ‘duty of responsibility’ to take reasonable steps to prevent their RFSP committing a “prescribed contravention” in the area of business that they are responsible for. The Heads of Bill contains a non-exhaustive list of circumstances that the regulator will take into account when assessing whether an SEF has taken reasonable steps in the case of a prescribed contraventions.

IAF will include a number of amendments to F&P. One of the most significant changes is the requirement for RFSPs to certify F&P staff themselves. A CF role holder will only be able to perform their role when the RFSP has certified in writing that the individual complies with applicable F&P standards.

This part of the regime primarily involves changes to the regulatory system as opposed to containing guidelines for RFSPs. One of the most significant elements is the Regulator’s decision to remove the ‘participation link’ between individuals and the RFSPs they are employed by. Historically, an RFSP would need to have been found to have breached legislation before any individuals could be pursued by the CBI.

How can we help?

Grant Thornton recognises that implementing new regulatory frameworks may prove to be onerous and time consuming for RFSPs. We understand the practical operational aspects and our team have direct experience of the challenges experienced and lessons learned in implementing the equivalent framework across the UK, Singapore and Australia. We can offer key insights and practical support across all elements of IAF, allowing organisations to focus on those activities that maximize value.