There has been significant talk over the last few years about the updating of company law in Ireland by the enactment of a new Companies Act in place of the existing legislation which stretches from 1963 to 2013.

Once commenced, the Act will repeal all existing company law statutes and the majority of related statutory instruments. The Act provides a consolidated and current company law code for its users which includes companies, directors, professional advisers, and shareholders. 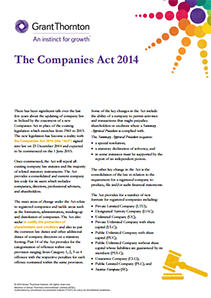