What is a company strike off?

A company strike off is a process whereby a company is removed from the Register of Companies and ceases to exist. A company which has been struck off or dissolved can no longer trade, sell assets or make payments.

There are two types of strike off – voluntary and involuntary.

What is a voluntary strike off?

When a company is no longer needed, i.e. following a group reorganisation or the company ceased to trade and is no longer required, the directors may decide to apply to the Registrar of the Companies for the Company to be voluntarily struck off. When this decision is made internally by the business and the strike off process is initiated by the board the strike off is voluntary.

Before the company can make the strike off application the board needs to ensure that ALL of the following conditions are satisfied: 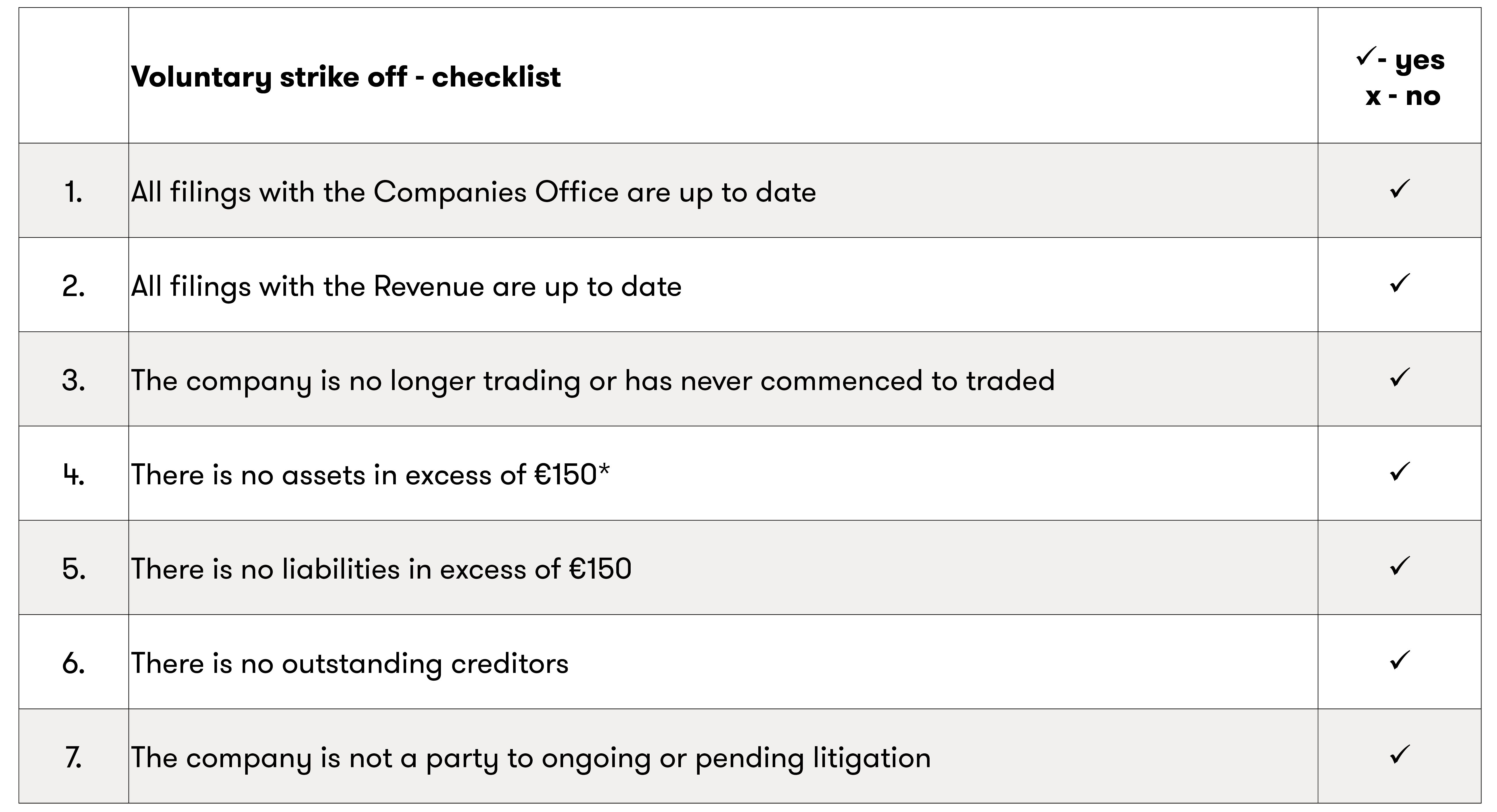 When the board is satisfied that all the above conditions are met they can commence the procedure.

What are the steps of voluntary strike off process?

A special resolution must be passed by the members, resolving to apply to the Registrar for the company to be struck off the register and that pending the determination of its application to be struck off, that the company will not carry on any business or incur any liabilities. The resolution must be made no more than 3 months before the application.

A letter of no objection from the Revenue Commissioners is required. The letter must be dated not more than three months before the date of the receipt of the application by the Companies Registration Office (the “CRO”).

Deliver a form H15 to the CRO. This form can only be filed electronically via CORE and must be signed by all directors.

Can the strike off application be cancelled or withdrawn?

Once the duly completed strike off application is filed with the CRO the Registrar will publish a notice of the intention to strike the company off the register in the CRO Gazette. The company will be dissolved within 90 days of the notice unless an objection to the strike off is filed.

An objection to the strike off can be filed within 90 days of the publication of the notice by any person on the grounds that the one or more conditions as set out in the table above have not been satisfied.

The company can also request cancellation of the strike off within 90 days of the publication of the notice.

What is an involuntary strike off?

The Registrar can commence the strike off proceeding if:

How  does the involuntary strike off work? Can it be stopped before the company is struck off and dissolved?

What are the consequences of involuntary strike off?

Is the strike off and dissolution the end of a company?

A struck off company can be restored within 20 years from the date of dissolution.

If a company has been struck off for a period no longer that 12 months an application can be made to the Registrar of the Companies to restore the company by administrative order. If the 12 months already elapsed the application must be made to court.

*members’ liability is limited to any amount of unpaid capital only