Ireland has long been noted as the domicile of choice for managers who are seeking to establish regulated funds which may be distributed globally.

It was noticeable however, that Ireland did not offer a fund structure similar to the SICAV offered in other EU jurisdictions and the Irish government set about filling this gap as part of its IFSC Strategy for 2011-2016.

In its most simplistic form, the ICAV is a new corporate vehicle designed for Irish funds. It will sit alongside the Public Limited Company (“PLC”) which has been the most successful and popular of the existing fund vehicles to date.

Legal form – what’s the difference between the ICAV and the PLC?

This is seen as a positive, given that the Irish Companies Acts are more applicable to Irish trading companies than investment funds. Reduced administrative obligations and costs are likely to be applied to funds established as an ICAV as a result.

ICAV – tax transparency – its unique selling point for US investors

Most offshore funds are considered Passive Foreign Investment Companies (“PFIC”)
for US income tax purposes. PFIC classification can give rise to unfavourable tax treatments for an investor and as a result may reduce the attractiveness of the fund to many US taxable investors.

The PLC as a corporate entity cannot elect to be treated as a partnership for US tax purposes. As a result, if a manager wished to attract US investors to its Irish fund it generally structured such a fund in the form of an investment limited partnership or unit
trust.

The addition of the ICAV to the suite of available Irish fund structures is therefore a significant development for the attraction of US managers and US investors to Irish domiciled funds.

The Companies (Miscellaneous Provisions) Act, 2009 (the “Provisions”), introduced efficient and effective processes for re-domiciliation of funds to Ireland. The Provisions allow offshore corporate funds from certain prescribed locations to migrate to Ireland by re-registering as an Irish UCITS or AIF authorised by the Central Bank of Ireland while maintaining its legal identity.

Given that there is no change in legal identity, the re-domiciliation should not constitute a taxable event for investors. In addition and importantly, the re-domiciling fund should retain its performance track record post migration.

Existing PLC’s will be able to convert to an ICAV and offshore funds considering re-domiciling to Ireland can re-domicile to Ireland by continuation as an ICAV. It is expected that a large number of existing PLC’s will take advantage of this option to migrate to an ICAV in particular to avail of the tax treatment benefits available for US taxable investors. The entire conversion process is expected to take 6 – 8 weeks based on the current re-domiciliation regime that is in place under the Irish Companies Acts.

What other features does the ICAV have?

To a large extent, the ICAV will be quite similar to the PLC, for example:

The ICAV will also have some differentiating features including:

The ICAV bill is presently undergoing parliamentary and regulatory reviews and current expectation is that the ICAV bill will become law by the end of 2014.

The Central Bank of Ireland has confirmed that it will be in a position to begin accepting the establishment of ICAVs within two weeks of the bill being signed into Irish legislation.

The ICAV represents an additional structural option to managers that will complement the existing options available in Ireland and will further enhance Ireland’s reputation as the asset management domicile of choice. 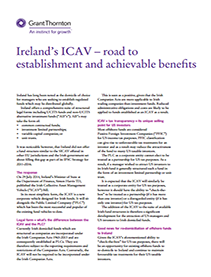