Reform of digital tax rules: where are we now?

The decision last month by the US to drop its safe harbour proposals in relation to OECD digital tax plans means that talks at the OECD can progress on reaching a consensus on reforming digital tax rules, with an agreement possible as early as summer 2021.

Notwithstanding the renewed impetus at OECD level, the EU has announced plans to examine the possibility of a new “digital levy”. While details are vague, the EU is clearly concerned that reaching consensus at OECD level will prove problematic, even with the US back at the table.

The EU had previously proposed a simple turnover based digital tax based as an interim solution pending the development of a more sustainable and appropriate longer term proposal. The new digital levy discussions supersede the turnover based tax proposals, although ultimately a levy based on turnover may be the outcome.

The OECD’s ambitious plans are known as Pillar One and Pillar Two, first outlined in 2019. These follow on from the original BEPS anti-avoidance package previously agreed, which has fundamentally rewritten the global tax rulebook.

Pillar One considers the allocation of a greater share of companies’ profits to market/user jurisdictions, as opposed to the location of residency or control.

Work on Pillar One and Pillar Two is taking place despite the fact that the impact of the original BEPS proposals has not been properly assessed.  Notwithstanding the complexity of the proposals and the likely challenges in reaching a global consensus, there is a determination at OECD level for further changes that leads many to believe that change is inevitable.

What does it mean for Ireland?

Any changes at EU or OECD level that either introduce a tax on digital income or reallocate taxable profits to market jurisdictions will dilute the benefit of Ireland’s low corporation tax rate.

However, an even worse scenario for Ireland is that no agreement is reached at OECD or EU level.  That increases the risk of individual countries introducing or retaining their own digital taxes in an un-coordinated manner, increasing both the tax and administrative cost for groups.

It is in Ireland’s interest for agreement to be reached, ideally at OCED level, thus providing much needed certainty for foreign investors. While ultimately Ireland may be a relatively less attractive proposition following these changes, we will remain arguably the most compelling location in Europe for foreign investors, with a full suite of tax reliefs in addition to many non-tax benefits.

It’s worth noting that the EU has not yet dropped its long standing plans for some form of corporate tax harmonisation in Europe. In our view, the likelihood of these plans coming to fruition is low. However, the failure to reach consensus at either OECD or EU level on digital tax reform may increase focus on wider harmonization plans.

What is next? Some key dates:

What has happened already?

Summary of key steps in the OECD work 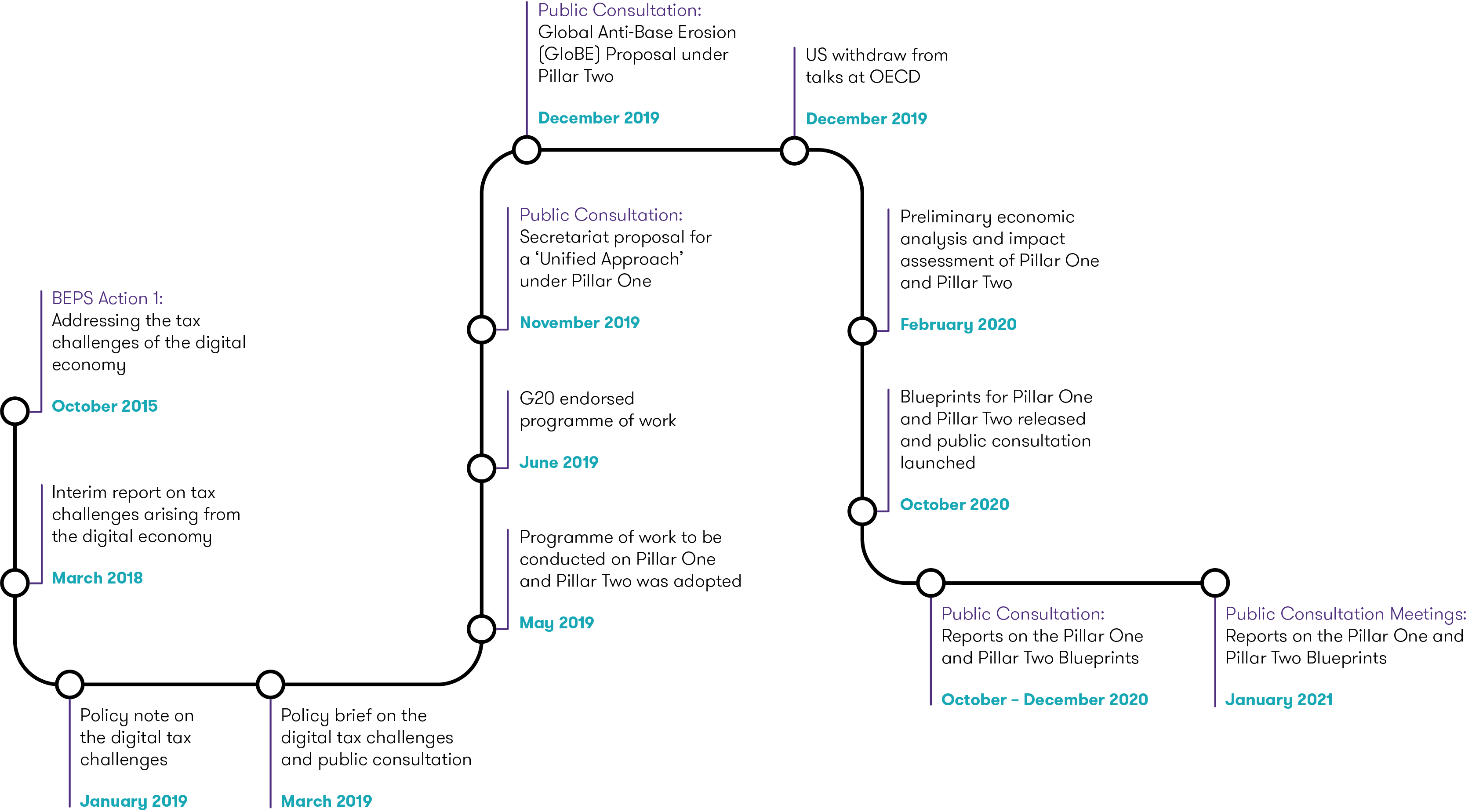