Finance Act 2016 contained a number of measures in relation to the taxation of certain
Irish property-related assets. The intention to introduce such measures was well ﬂagged both before and within the Minister’s Budget Speech in October 2016, and the measures were designed to counteract a perceived erosion of the Irish tax base in relation to the holding of such assets.

The measures can be divided into those that impact on s110 TCA 1997 companies and those that impact on Irish regulated funds. This article focuses only on the latter category, i.e. those impacting on Irish regulated funds, and the s110 changes are considered in the article by Séamus Kennedy, “Finance Act 2016 Changes to the Irish Securitisation Tax Regime”, in this issue of Irish Tax Review.

As an overall comment, the changes themselves are extremely complex and contain a plethora of deﬁnitions, new concepts and anti-avoidance measures that are difficult to get to grips with. Based on industry discussions, a considerable number of issues have been identiﬁed already, from both a technical and a practical perspective, which remain unclear at the time of writing. This article is obviously a summary of the main impact of the changes and does not address all of these associated issues.

The practical operation of the rules will prove challenging, as a result, for fund administrators and/or other service providers, particularly in the early days of their operation (they are generally effective from 1 January 2017), and more issues are likely to be identiﬁed over time once the rules start being implemented. It is anticipated that comprehensive Revenue guidance will issue in due course in relation to these rules. 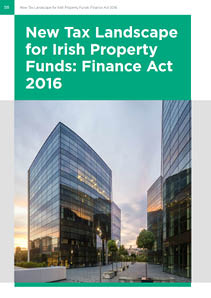