Country-by-Country reporting has been live for Irish companies since 1 January 2016. Now is the time to start configuring your systems to deal with this new reporting requirement.

As part of the Base Erosion and Profit Shifting (BEPS) programme, the OECD issued its final report on Action 13, transfer pricing documentation and Country-by-Country (CbC) reporting in October 2015.

Irish parent companies of multinational enterprises are now required to provide annually and for each tax jurisdiction in which they do business, a CbC report to Revenue.

This briefing look at: 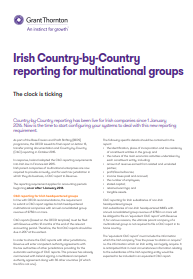