The eagerly awaited legislation, the Irish Collective Asset-management Vehicles Act (ICAV), was signed into law by the President on March 4, 2015.

The Act will come into operation by way of ministerial order and it is anticipated that the Minister for Finance will issue the commencement order shortly.

The Act provides for the establishment of a new form of corporate structure that is designed specifically for investment funds, both UCITS and AIFs, and to meet the changing needs of the global funds industry.

For many years, Ireland has been the domicile of choice for assets managers seeking to establish and operate regulated funds. As of December 2014, there were 5,833 domiciled funds with assets of approximately €1,661bn. In addition, in recent years Ireland has been the fastest growing international fund administration centre. As of December 2014, Irish administrators serviced 13,193 Irish and non-Irish domiciled funds with assets under administration of €3,373bn.

Despite the continuing success of the Irish funds industry, it was noticeable that Ireland did not offer a fund structure similar to the SICAV offered in other EU jurisdictions and the Irish government set about filling this gap as part of its IFSC Strategy for 2011-2016. In this regard, the government undertook to introduce a legal framework for a corporate fund structure which is not a company required to be incorporated under the
Irish Companies Act, resulting in the introduction of the ICAV.

What is the ICAV?

The ICAV is a new corporate vehicle designed for Irish investment funds. It will exist in addition to the current fund structures, including investment companies established as public limited companies, and will offer an increased level of choice for fund promoters.

Why is the ICAV being introduced?

The ICAV legislation will modernise the corporate fund structure and is conceived specifically with the needs of investment funds in mind.

As ICAVs will not be incorporated under the Companies Act, they will not be subject to the onerous rules that are considered more appropriate to trading companies. Instead, ICAVs will be both authorised and regulated by the Central Bank of Ireland. The Central Bank of Ireland has previously indicated that it will be in a position to accept applications under the Act within two weeks of commencement.

Features of the ICAV

The following outlines the main features of the ICAV:

The ICAV should prove particularly attractive to US investors looking for tax efficient returns. Currently an Irish fund structured as a PLC is a corporation for US tax purposes and is not permitted to “check the box” in order to be treated as a transparent entity for US tax purposes. As a result, such Irish funds are generally subject to tax at two levels from a US tax perspective:

An ICAV will be able to elect its classification under the US “check the box” tax rules and as a result will be treated as a transparent or disregarded entity for US tax purposes and should be open to more favourable tax treatment. The availability of an ICAV should therefore enhance the attractiveness of Irish funds to investment managers seeking to market their funds in the US.

Re-domiciliation of offshore funds to Ireland

Given the ICAV’s aforementioned ability to “check-the-box” for US tax purposes, there will be an opportunity for existing offshore funds to re-domicile to Ireland and continue to maintain favourable tax treatments for their US taxable investors. Irish legislation allows for the efficient and effective re-domiciliation of funds to Ireland which will allow those funds to migrate to Ireland whilst maintaining its legal identity. As there would be no change in legal identity, the re-domiciliation should not constitute a taxable event for investors and the fund should retain its performance track record following the migration.

Existing PLC’s will be able to convert to an ICAV. It is expected that a large number of existing PLC’s will take advantage of this option to migrate to an ICAV in particular to avail of the tax treatment benefits available for US taxable investors.

The ICAV represents an additional structural option to managers that will complement the existing options available in Ireland and will further enhance Ireland’s reputation as the asset management domicile of choice. 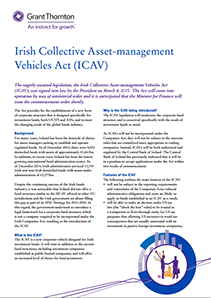