The IASB has postponed the effective date of its 2014 Amendments 'Sale or Contribution of Assets between an Investor and its Associate or Joint Venture –Amendments to IFRS 10 and IAS 28’. A new effective date has not yet been determined. Despite this change, the 2014 Amendments may still be adopted early if entities wish to do so.

‘Sale or Contribution of Assets between an Investor and its Associate or Joint Venture –Amendments to IFRS 10 and IAS 28’ was issued in 2014 and addressed an acknowledged inconsistency between IFRS 10 and IAS 28 relating to how to account for transactions in which a parent entity loses control of a subsidiary by contributing it to an associate or joint venture. The 2014 Amendments required entities to recognise:

The 2014 Amendments were due to become effective for accounting periods beginning on or after 1 January 2016. A number of questions were however raised over the application of the Amendments such as how the transfer of assets would be recognised if the investor receives both assets and an equity interest, and how the other requirements of IAS 28 interact with the changes made to IFRS 10.

In deliberating these issues, the IASB decided that it would be best to consider them more fully as part of its research project on the equity method of accounting rather than by making further changes now.

'Effective Date of Amendments to IFRS 10 and IAS 28' therefore defers indefinitely the mandatory effective date of the 2014 Amendments. The underlying issues will instead be addressed when the IASB issues any amendments resulting from its research project on equity method of accounting. Entities will still be permitted to apply the 2014 Amendments as the IASB does not wish to prohibit the application of better accounting. Any proposal to insert a new effective date will be exposed for public comment.

We agree with the proposal to defer the effective date of the 2014 Amendments. We believe it does not make sense to require entities to change the way they apply IAS 28 now if further amendments are likely to arise from the IASB's research project on the equity method of accounting in the near future. 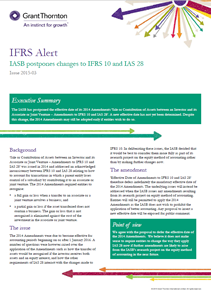 Sign up to get the latest updates by email