The Financial Reporting Council (FRC) has recently published Financial Reporting Exposure Draft (FRED) 62 ‘Draft amendments to FRS 102 – Fair value hierarchy disclosures’. The FRED proposals are intended to simplify the preparation of disclosures about financial instruments for financial institutions and retirement benefit plans, whilst increasing consistency with disclosures required under European Union (EU) adopted IFRS that users of the financial statements will often be familiar with.

FRED 62 proposes to amend paragraphs 34.22 and 34.42 of FRS 102 to require disclosure of financial instruments held at fair value on the basis of a fair value hierarchy consistent with EU-adopted IFRS.

When finalised, the amendments are proposed to apply for accounting periods beginning on or after 1 January 2017. Early application will be permitted.

How we see it

We welcome these proposed amendments as they will alleviate stakeholders’ concerns that certain disclosures required by financial institutions and retirement benefit plans could be made both more cost effective and more consistent with IFRS. We expect that FRS 102 will be updated for these amendments in March 2016 and that most financial institutions and retirement benefit plans will early adopt these amendments upon issuance.

For Irish UCITS funds, some boards may consider moving their first quarter board meeting to late April 2016 to allow the relevant fund early adopt the amendments proposed by FRED 62 when they become effective as expected in March 2016. This is to avoid investor confusion and smooth the financial statements preparation process for future years. 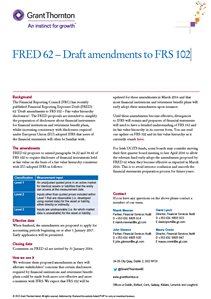