Flowering shares are a new class of ordinary shares issued by a company, which entitle the holder to capital generated by the future growth of the business above its current value. In order to both reduce the initial cost of acquiring the shares and to create an incentive for the employee(s), the flowering shares will include a requirement that the company reaches an agreed level of future growth (known as the “hurdle”). Shares are issued at day one value.

Once the hurdle has been met, the shares will have an agreed value. This amount can either be variable (based on a suitable percentage) or a fixed and hardwired amount.

Some companies create new share classes that offer little or no present day value to their holders, but provide the ability to benefit in future increases in share value. However, when they are disposed of (e.g., when the startup is acquired), the rise in share value is taxed as a capital gain. Capital Gains Tax (CGT) is payable at a rate of 33%.

Entrepreneurs’ relief may be available on the disposal of these shares, subject to meeting the requisite conditions. Finance Bill 2015 introduced entrepreneurs’ relief. The new regime provides for a reduced rate of CGT of 20% on chargeable gains on the disposal of chargeable business assets (e.g. shares acquired under a flowering share scheme) made by an individual on or after 1 January 2016 up to a lifetime limit of €1m.

To avail of this relief, the shareholder must hold at least 5% of the share capital. Furthermore, the chargeable assets must have been owned for a minimum period of three years prior to the disposal (other conditions must also be satisfied). 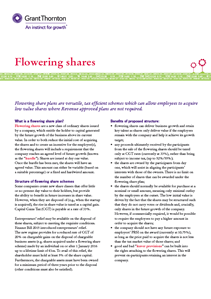