Amendments to IFRS 17 and IFRS 4

The International Accounting Standards Board (IASB) has issued ‘Amendments to IFRS 17 ‘Insurance Contracts’’ (the Amendments). The aim of the amendments is to address the concerns raised by stakeholders and help entities to more easily transition and implement the Standard.

The IASB also issued an amendment to the previous insurance Standard IFRS 4, ‘Extension of the Temporary Exemption from Applying IFRS 9 (Amendments to IFRS 4)’ so that entities can still apply IFRS 9 ‘Financial Instruments’ alongside IFRS 17.

IFRS 17 was issued in May 2017, and since its release the IASB has been monitoring the implementation and concerns raised by stakeholders which has led to a series of amendments being issued that: 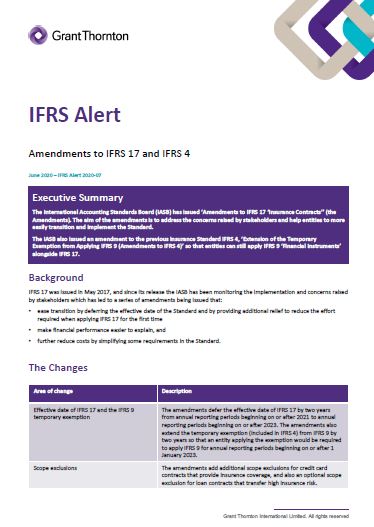