A smarter way to get deals done

With significant values at stake, negotiating the completion mechanism and Sale and Purchase Agreement (SPA) can be the difference between a successful and unsuccessful transaction. With the absence of definitive rules or standards for completion mechanisms, parties to a transaction often cite ‘market practice’ when negotiating how the initial offer price is converted into the final equity value paid for a business.

However, there has thus far been limited, publicly available data to determine what is meant by ‘market practice’.

As part of helping shape a vibrant economy, we are leading the way to establish and improve market best practice in SPAs. In 2016, we authored the Best Practice Guideline: Completion Mechanisms Determining the Equity Value in Transactions, published by the Institute of Chartered Accountants in England and Wales (ICAEW) and we published a UK market survey ‘A smarter way to get deals done’.

This year we expanded our research to identify market best practice around the world, obtaining the views of 563 respondents from over 400 different organisations in 13 countries.

We hope that used together, the ICAEW Best Practice Guideline and our SPA market survey findings will empower principals and advisers to achieve smoother, more successful transactions.

This report presents the key themes identified by our international survey respondents. The detailed results are available in the appendices.

Our key findings this year include: 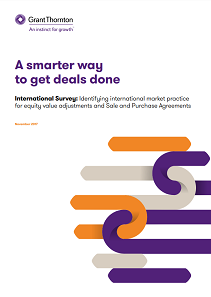