The IASB has published amendments to IFRS 9 ‘Financial Instruments’ that allow companies to measure particular prepayable financial assets with negative compensation at amortised cost or at fair value through other comprehensive income.

The amendments also include clarifications to the modification or exchange of a financial liability that does not result in derecognition(see overleaf).

After IFRS 9 was issued, the IFRS Interpretations Committee received a request on how to apply the IFRS 9 requirements for recognising and measuring financial instruments to certain debt instruments where the borrower is permitted to prepay the instrument at an amount that could be less than the unpaid principal and interest owed. Such a prepayment feature is often referred to as including potential 'negative compensation'.

Main issues addressed by the amendments to IFRS 9

Under the then existing requirements of IFRS 9, a company would have measured a financial asset with negative compensation at fair value through profit or loss as the ‘negative compensation’ feature would have been viewed as introducing potential cash flows that were not solely payments of principal and interest. However, to improve the usefulness of the information provided, in particular on the instrument’s effective interest rate and expected credit losses, the Board issued ‘Prepayment Features with Negative Compensation (Amendments to IFRS 9)’. The amendment means that entities will now be able to measure some prepayablefinancial assets with negative compensation at amortised cost.

The amendments are effective for annual periods beginning on or after 1 January 2019, with earlier application permitted. 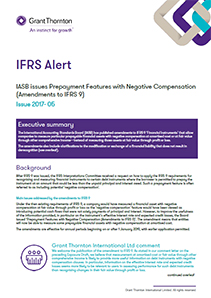