The Conceptual Framework is a practical tool that assists the IASB in developing and revising Standards that are based on consistent concepts. It also helps preparers to develop consistent accounting policies when no Standard applies or when a Standard allows a choice of accounting policy.

The original Conceptual Framework was issued in 1989 and was updated on several occasions, the last being in 2010. However, despite efforts to make it an overarching set of concepts, preceding versions still lacked guidance in some areas or contained guidance that was not as clear as desired.

It now contains guidance on measurement, financial performance, derecognition and the reporting entity—areas that previously contained no or only very little guidance. It also clarifies some existing guidance by for example reintroducing the concept of prudence or improving the concept of substance over form.

Also, preparers will continue using the 2010 definitions of assets and liabilities when accounting for regulatory account balances. This means preparers will not have to change their accounting for rate-regulated assets and liabilities twice within a short period of time as the IASB is planning to replace the interim Standard IFRS 14
‘Regulatory Deferral Accounts’ in the near future.

The Conceptual Framework is not a Standard and will not change or override any existing Standards. It is primarily a tool for the IASB to help them develop Standards based on consistent concepts. Over the last few years, the IASB has already started applying some of the new or revised concepts when developing or revising Standards.
However, entities that develop accounting policies using the Conceptual Framework, or that are in any other way affected by the amendments to IFRS Standards, will have to apply the changes from 1 January 2020. 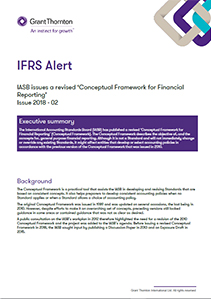