When the new mandatory accounting framework for Irish and UK companies was issued in March 2013, the transition date seemed a long way off. Indeed it was, but now the effective date for most companies, 1 January 2015, has come and gone and the question arises: how is it for you?

There is not a one-size-fits all answer to that question. A minority of companies have applied the new framework early so as to take the benefit of the reduced disclosure framework; the vast majority have yet to start any work on the conversion; and there are the lucky few that, by not having a calendar year-end, get another year of grace and so can see how it has impacted on others before making their own decisions on next steps.

In this context, let us remind ourselves of the changes in the accounting framework before considering some of the potential business, as well as accounting, impacts. Figure 1 provides a snapshot of those changes.

The choice in FRS 100 means that the numbers in the financial statements can be prepared on the basis of IFRS, FRS 102 or the FRSSE (Financial Reporting Standard for Smaller Entities).

The framework that you choose should be influenced by the complexity of your business and the stakeholder group involved. For example, if your business is operated through a single company and undertakes trade in Ireland only, it is likely that the directors will choose to apply either FRS 102 or the FRSSE. If so, then for the most part the new accounting framework will impact on the look and feel of the financial statements, but the reported numbers may not change significantly.

For businesses that are more complex, that involve trading through a group or that are just bigger in size, there is likely to be an impact not only in the numbers and disclosures reported but also potentially on other areas of the business such as tax or IT.

Snapshot of the new framework 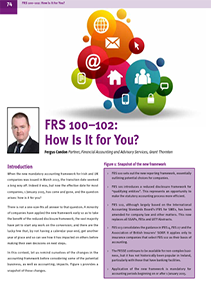