How will the Companies Act 2014 affect the Motor Retail industry?

There has been significant talk over the last few years about the updating of company law in Ireland by the enactment of a new Companies Act in place of the existing legislation which stretches from 1963 to 2013. The new legislation has become a reality with the Companies Act 2014 (the “Act”), signed into law last December and commencing into operation in June.

It is the largest piece of legislation to be introduced in Ireland and will have an impact on every Irish company. The new Act puts the private limited company at the heart of the legislation, which is something that is long overdue considering 90% of the companies registered in Ireland are private limited companies. The Act seeks to set, out in clear terms, the duties of directors and protection for shareholders and creditors. Overall, the Act is a positive piece of legislation which aims to reduce red tape and bring Irish company law up to date.

The new Act introduces a new simplified type of private limited company with a one-page constitution, the possibility for single director companies and reduced administrative compliance obligations. It also sets out company directors’ duties for the first time and introduces a new “summary approval procedure”, which bypasses the need for High Court applications for certain activities such as capital re-organisations and reductions.

The Act provides for a number of new formats for registered companies and also provides for the designation at the end of the company name to make it easily recognisable as a particular type of company. Below is a short table setting out some of the more common company types. We would note that the Irish language equivalent can also be used. 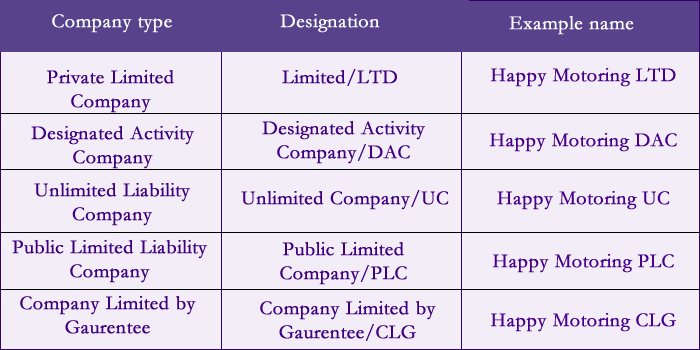 Over the coming months, companies should be speaking with their advisors and considering which entity type best suits their business and put the necessary steps in place to ensure they have a company fit for their purposes under the new regime.

The Act will also extend the audit exemption to small groups, unlimited companies and guarantee companies once they meet the criteria set out in the Act (these companies were previously prohibited from availing of an exemption from having their accounts audited).

Certain transactions will now become easier for companies such as reductions or variations of capital, simplification of unwieldy group structures and mergers of private Irish entities.

The Act will bring more emphasis on the need to correctly document loans between directors and companies. It should of course be noted that loans to directors, while permissible under certain criteria in the Act, still have a taxation implication, and, advice should always be taken from your professional advisors in this regard.

As part of the increase in good governance certain large companies (turnover exceeds €25 million and balance sheet total of €12.5 million) will be required to make a director’s compliance statement whereby they must acknowledge compliance with both company and tax law. Another new requirement for directors will be that in the directors’ report in the financial statements the directors must confirm there is no relevant audit information of which auditors are unaware. This leads to increased accountability for directors of Irish entities.

Up until the commencement of the Act only ‘public interest entities’ need to establish an audit committee.  This is now being extended to ‘large companies’ under the Act. Large companies are defined as companies where the turnover exceeds €50 million and the balance sheet total exceeds €25million. If a company (or group) decides not to set up an audit committee (which is permitted under the Act) it must disclose the reasons for this in the director’s report.

Part 5 of the Act gives statutory recognition to the current common law and equitable principles regarding directors’ duties. This will mean greater clarity for directors.

The Act provides that those persons who are “shadow directors” and “de facto” directors will equally be bound by the duties in the same manner as directors who have been formally appointed. The duties are not new but are re-stated together with a couple of adjustments, leading to more clarification for directors as to the requirements of the role and attaching responsibilities.

The duties can be mostly broken down into fiduciary duties (previously coming from case law) and general duties (previously more common law duties but also including and expanding upon existing statutory duties). This codification of directors’ duties is something to be welcomed as it removes any ambiguity surrounding the duties owed by directors and provides a centralised reference point for directors and professional advisors.