Finance Bill 2021 was published on October 21st and legislates for the tax changes announced in the recent Budget, whilst also including a number of technical amendments to Ireland’s tax legislation.

We have summarised below some of the key changes impacting international groups operating in Ireland.  We will circulate additional detailed analysis in respect of some of the more complex changes in due course.

As widely covered internationally, Ireland has signed up to the OECD BEP2 Pillar 2 initiative to introduce a minimum effective corporate tax rate of 15% for large multinationals, where global group turnover exceeds €750 million.  Following successful negotiations by the Irish Government with the OECD and EU, Ireland’s long-standing 12.5% corporation tax rate will continue to apply for groups that do not exceed this turnover threshold.  The timing of the introduction of the 15% rate remains unclear.

OECD negotiations in respect of Pillar 1 and the sharing of taxing rights internationally are still ongoing, but Ireland has agreed to sign up to this when initiated.

The digital gaming sector is a sector that has grown exponentially in the past decade.  However, employment growth in the sector in Ireland has not matched this global trend.  To encourage employment in the sector, the Government is introducing a tax credit specific to the sector. The relief will take the form of a refundable corporation tax credit available to digital games development companies for qualifying expenditure incurred on the design, production and testing of a digital game.

The credit is available to companies’ resident in Ireland or resident in an EEA state and carrying on business in Ireland through a branch or agency. Where a qualifying digital game is being developed, a digital games development company must make an application to the Minister for Tourism, Culture, Arts, Gaeltacht, Sport and Media, who may issue an interim certificate confirming eligibility for the tax credit.

The tax credit can be set against the company’s Irish corporation tax liability, or where there are excess credits, these shall be refunded to the digital games development company.  A tax credit will not be due in respect of an interim or final certificate issued after 31 December 2025.

The introduction of the tax credit is subject to European Commission approval.

In accordance with the first EU’s Anti-Tax Avoidance Directive, Ireland has been required to introduce interest limitation rules (“ILR”) for accounting periods commencing on or after 1 January 2022.

The ILR legislation is designed to combat attempts by multinational enterprises and other companies to obtain excessive tax relief for net interest and similar financing costs.  The objective of these new rules is to ensure relief on financing costs is commensurate with the extent to which business activities are subject to corporation tax.  The ILR achieves this by limiting the maximum tax deduction for net borrowing costs to 30% of EBITDA as measured under tax principles.  This ignores any losses carried forward or back or group relief.

The cap is based on broadly defined “interest expenses” less “interest income”, referred to as “exceeding borrowing costs”.

There are certain exclusions as follows:

Companies can elect to join an “interest group”, resulting in ILR calculations being done at the local group level.  The group can then choose how to allocate any disallowed interest between its members.  Any unused capacity may be carried forward for 60 months. However, if disallowed interest would have created or increased tax losses, this is treated as a loss incurred in the period and subject to the same restrictions that are applicable to tax losses being carried forward.

From a practical perspective, Irish groups with high leverage and interest costs should consider the above regime and carry out a detailed analysis to understand the implications the ILR may have on their future tax charges and cash tax costs.

The Bill makes provision for the introduction of anti-reverse-hybrid rules as required in the second EU Anti-Tax Avoidance Directive.  The purpose of anti-hybrid rules is to prevent arrangements that exploit differences in the tax treatment of an instrument or entity under the tax laws of two or more territories to generate a tax advantage.

The anti-reverse hybrid rules bring certain tax transparent entities (e.g. Irish partnerships) within the scope of Irish corporation tax where the entity is 50% or more owned/controlled, as defined, by entities resident in a jurisdiction that regard the entity as tax opaque and, as a result of this hybridity, some or all of the hybrid entity’s profits or gains are subject to neither domestic nor foreign tax.

Under the provisions, a “collective investment scheme”, as defined, will not be considered a reverse hybrid entity.  A reverse hybrid mismatch outcome will also not arise where the participator is established in a territory that generally exempts profits and gains from tax in that territory or does not impose a foreign tax on such income.

Some technical amendments to the existing anti-hybrid rules are also provided for in the Bill.

In order to qualify for the exemption, certain anti-avoidance measures must be satisfied, including that the beneficiary from the exemption must be tax resident in Ireland, and it must involve a bona fide commercial transaction, and not for the avoidance of tax or part of a wider tax avoidance scheme.

The AOA attributes profits to an Irish branch or permanent establishment of a foreign company, that would have been earned at arm’s length, as if it were a separate and independent legal enterprise performing the same or similar functions under the same or similar conditions. 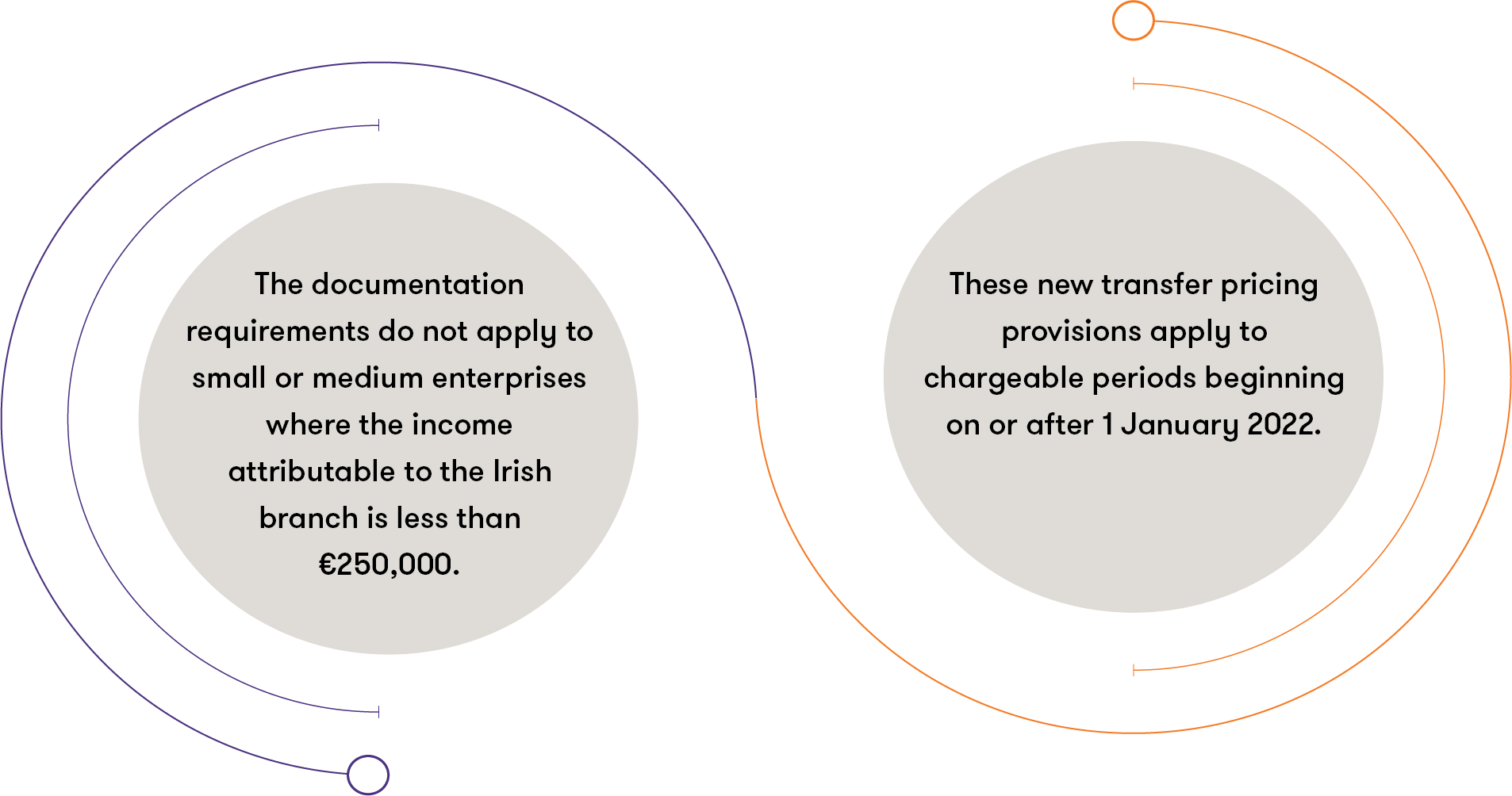 From 1 January 2022, non-resident corporate landlords will be subject to Irish corporation tax (as opposed to income tax) on Irish sourced rental profits and gains.

The current position is that where Irish real estate assets are held by a non-resident company, which does not carry on a trade in Ireland through a branch or agency, rental profits earned by the company will be subject to Irish income tax at a rate of 20%.  This change will result in an increase in the rate of tax from 20% to 25%, which is aligned to the current position for Irish-resident companies.

The amendment also brings chargeable gains arising to companies not resident in the State on the disposal of Irish property within the charge to corporation tax.  While this does not change the effective rate of tax on such gains (i.e. 33%), it will result in those companies being required to file and pay under the corporate tax regime and also falling within the potential scope of the new interest limitation rules.

Provisions have also been included in the Finance Bill to deal with the transitional requirements for rental losses and capital allowances carried forward by such companies.

The Bill includes a welcome technical amendment to the anti-avoidance provisions within Section 129A TCA 1997, which applies to companies migrating to Ireland.  Previously, pre and some post migration profits were deemed taxable income when subsequently distributed by the newly Irish resident company to an Irish parent company.  Under the new provisions, where a company makes an interim distribution in the period it migrates, the profits in that period can be split between the pre and post migration periods, and the profits in the post migration period will eligible for tax exemption as franked investment income.

Interest on loans to defray money applied for certain purposes

The Bill makes some technical changes to the anti-avoidance provisions in Section 840A TCA 1997 that deny a tax deduction for interest on certain loans between connected parties used to finance intragroup transactions.  The amendment specifies that a loan includes a promissory note and any other agreement or arrangement having a similar effect.  The amendment also provides that a deduction is denied for interest payable on any form of refinancing of such a loan.

Ireland introduced the EU DAC6 provisions in Finance Act 2019 and these require intermediaries or taxpayers to disclose details to the tax authorities of cross-border arrangements which meet certain ‘tax avoidance’ hallmarks.

The Bill now makes provision for the Irish Revenue Commissioners to enter any premises or place of business of an advisor or relevant taxpayer for the purposes of determining whether a DAC6 filing is correct or where information is not included in such a return, that it was correctly not so included (legal professional privilege is unaffected by this provision).

Where Revenue believe a cross-border arrangement may contain one or more specific hallmarks concerning automatic exchange of information and beneficial ownership, Revenue may access various sources of information including the various central registers for beneficial ownership (e.g. companies, trusts, etc.). Additionally, Revenue will also be permitted to request designated persons (e.g. accountants) to supply records regarding customer due diligence and AML records.

The Bill further strengthens the powers of the Revenue Commissioners with regard to penalties and the publication of tax defaulters details for the filing of incorrect tax returns.

For additional information on any of the foregoing provisions, please contact the below or your usual Grant Thornton contact.