Financial institutions around the world continue to struggle with the numerous regulatory changes that followed the global financial crisis. The transition from Undertakings for Collective Investment in Transferable Securities (UCITS) IV to UCITS V is a clear example of the shift in regulator’s mentality after the economic crisis. While the former focused on enhancing market efficiency by enabling fund managers to operate across EU member states, the latter seeks to address some of the vulnerabilities exposed by the Madoff and Lehman Brothers incidents.

The UCITS V Directive (or the “Directive”) was published in the Official Journal of the European Union (OJ) in August 2014. This follows the Directive being adopted by the European Parliament and the Council of the EU in April 2014 and July 2014 respectively. The Directive came into force on 17 September 2014 and member states have to transpose it into their domestic laws, regulations and administrative provisions by 18 March 2016.

With investor protection as one of its key objectives, the European Commission’s (EC’s) attention has been drawn back to the UCITS Directive due to different interpretations and inconsistencies in its implementation across member states.

Additionally, the advent of the Alternative Investment Fund Managers Directive (AIFMD), which had to be implemented by July 2013, subject to certain transitional arrangements, has led the EC to address the imbalance between the level of investor protection afforded to those investing in UCITS and those investing in Alternative Investment Funds (AIFs). The UCITS V Directive covers three main areas: remuneration, the depositary regime and regulatory sanctions.

Grant Thornton sees UCITS V as a case of ‘more of the same’ when compared to the AIFMD as many of the changes are aligned with (and to some extent exceed) the benchmark set by the AIFMD. Therefore considering UCITS V early, whilst simultaneously comparing the changes to the AIFMD, will benefit financial institutions. 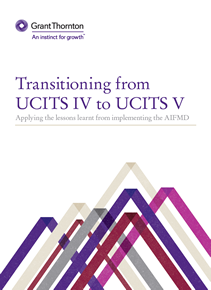