For tech companies, the regulatory environment is tougher now than ever before.

As a way to protect the national interest, governments use compliance to restrict companies that could potentially disrupt established industries. The knock-on effect of this is that the tech industry as a whole is coming under extreme scrutiny and is facing a higher level of financial and reputational damage as a result. Rapidly expanding companies also face a wider range of individual regulations as they expand into new territories. Be it employment law, taxation, product safety or licensing.

Today, many of the most pressing compliance issues come down to data anxiety. As citizens become increasingly uncomfortable about threats to their personal data and privacy, governments are cracking down on the companies responsible for hosting that data and keeping it secure, as evidenced in the new EU General Data Protection Regulation (GDPR).

Worldwide, regulators have made it clear that they are becoming tougher on tech companies. Recent data protection developments following the recent European Court of Justice’s decision in Schrems v Facebook are becoming ever more complex. With Schrems signalling the end of the Safe Harbor arrangement between EU-US companies which has now given rise to the new EU-US Data Privacy Shield. While the text of same has recently been released by the EU Commission, its critics believe that the new privacy shield is still very much open to further legal challenge. 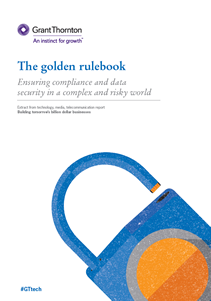