Cloudy with a chance of complacency

The Organisation for Economic Co-operation and Development’s
(OECD’S) latest proposals on taxing digital business pull back from the radical roadmap put forward in May to something much closer to the January policy note by proposing a modified residual profit split with benchmarking of routine profits. The G20 finance ministers subsequently welcomed progress and reaffirmed their commitment to seeking a consensus-based solution by the end of 2020.

Key developments include narrowing the scope to large enterprises carrying out business-to-consumer (B2C) transactions. It also looks like the arm’s length principle is back from the brink, having appeared doomed under the earlier proposals, though this is only a partial reprieve.
But the sighs of relief among mid-size multinational enterprises (MNEs) are likely to be tempered by continuing uncertainty over the type of commerce covered and size of affected businesses. Moreover, anything the OECD eventually agrees will only be a recommendation, leaving governments to frame their own measures and hence heightening the risk of double taxation and dispute.

Read the document in full 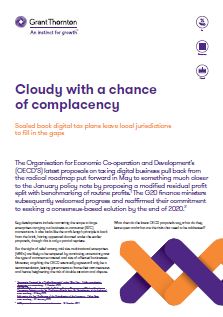