An Introduction to FRS102 for Charities

The Financial Reporting Council (FRC) has issued three new accounting standards, FRS 100-102, which will replace all existing FRS's, SSAPs and UITFs. The new financial reporting framework will be applicable on a mandatory basis for the majority of Irish entities for reporting periods starting on or after 1 January 2015. Charities will be required to apply FRS 102 'The Financial Reporting Standard applicable in the UK and Republic of Ireland' which was issued in March 2013.

FRS 102 addresses some of the specific reporting issues faced by charities and other public benefit entities, including the basis for recognising government grants, business combinations and the recognition of income from donors and other sources. The charity SORP has been updated to reflect the new framework and the final SORP has now been published and is available at www.charitysorp.org.

What you need to know

Subject to regulations, to be issued by The Charities Regulatory Authority, charities may be required to adopt the new financial reporting regime for accounting periods starting on or after 1 January 2015, with the comparative balance sheet and opening position requiring restatement.

It is not too soon to start considering how you will address the transition process. From our extensive experience in assisting clients with transition to EU-adopted IFRS, we know that good planning is key to success. Timely actions and the right support will ensure that the process goes as smoothly as possible.

There are also operational matters which may need to be addressed in preparing for transition, such as training requirements for your finance and operational teams, systems changes to ensure relevant information is captured, education of your stakeholders, and the potential need for additional resources.

This factsheet provides a summary of the key changes brought about by the FRS 102 compliant SORP (FRS 102 SORP), our interpretation of the practical effects of implementation, together with suggested actions. Most actions involve conducting a review of accounting policies. There is also a second SORP for smaller charities who elect to adopt the FRSSE (FRSSE SORP). Where relevant, the changes listed on the following pages will also apply to smaller charities. 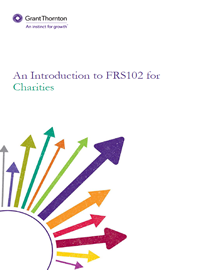