The potential for major U.S. corporate tax reform is greater than ever and will impact businesses operating in the U.S. and around the world. What is actually being proposed and what does it mean?

In this document we outline some answers to the most Frequently Asked Questions (FAQs) about the proposed corporate tax reform, including: 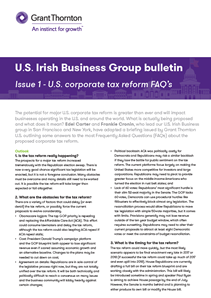