The Ministerial Order (SI 169 of 2015) (the ‘Order’) commencing the Companies Act 2014 (hereafter “the Act”) has now been issued. As expected the Order provides that the vast majority of the Act will come into force on 1 June 2015, with some limited exceptions. We discuss these limited exceptions and other relevant matters regarding commencement and transition below.

The Order confirms that the 1 of June 2015 is the appointed day on which the Act comes into operation. However, there are certain sections that will not come into force on this date:

Also the Order clarifies that certain accounting related provisions will only apply for companies whose financial year begins on or after 1 June 2015 – essentially these provisions come into force on the first day of the next financial year of a company after the 1 June 2015 commencement date.

Following the issue of the Order, the Companies Registration Office have clarified their approach in relation to financial statements attached to annual returns delivered to the Registrar on or after 1 June 2015.

The Order has confirmed that the Act will come into force on 1 June 2015 with the exception of certain provisions. Companies that have not yet approved their financial statements can consider whether there is merit in delaying approval until after the commencement date and therefore potentially take advantage of some beneficial provisions of the Act.

Furthermore, companies must now begin to consider what type of company format they will adopt and if relevant, register their choice within the 18 month transition period. 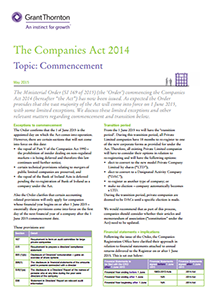