The half-life of German law is not only falling in the field of inheritance tax; the investment tax law has also experienced several changes in recent years. After the last amendment via the AIFM Directive Implementation Act from 24 December 2013, there was again a rumbling in the responsible committees, resulting in first discussion drafts of a substantial reform of the investment tax law in July 2015.

After adopting the current draft bill in the second and third reading by the German Federal Parliament, the Federal Council of Germany also issued its consent to the new investment tax reform law on 8 July 2016.

In this document, which has been produced by Warth & Klein Grant Thornton examines these changes. 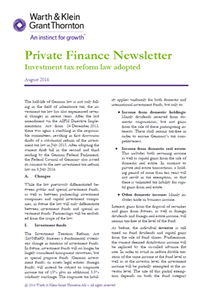