10 things to know about Brexit

Foreign Direct Investment (FDI)The attraction and retention of FDI will be more competitive in the wake of Brexit. The UK will be free to introduce aggressive tax policies to encourage FDI, already indicating a reduction of its corporate tax rate to 15% with France also intending on incentivising their income tax regime with the possibility of more countries following suit. Ireland will need to review its own tax policies to ensure it can compete for FDI in the new climate.

Worker mobility
While there is no immediate change to the free movement of EU workers into and out of the UK, any immigration restrictions introduced following negotiations will see working and visiting visa requirements imposed presenting administrative and cost burdens for businesses.

Imports and exports
Where the UK will no longer be part of the single market, any exports by the UK into the EU may be subject to tariffs, customs and excise duties at the point of import, thereby making UK goods more expensive in the EU market and creating an earlier cash flow point for businesses. The UK will be entitled to charge import duties on any EU imports into the UK thereby making EU products more expensive in the UK and reducing Irish export companies competitiveness in that market.

Currency
The UK currency plummeted to a 31 year low against the dollar post-Brexit and to a rate of GBP £1 = €1.19. As sterling falls, the cost of Irish goods and services to UK consumers goes up - so they buy less making Irish exports less competitive with the likely consequence of any exchange risk being pushed onto Irish companies. This causes obvious challenges for Irish exporters to the UK market. A knock-on effect of currency fluctuations and periods of uncertainty in a market is market volatility.

Trade
The UK is Ireland’s largest trading partner in the EU and Ireland is the fifth largest destination of UK exports. It is impossible to see a situation where trade will not be affected during the exit process negotiation. The longer the uncertainty continues the greater the risk of extreme market volatility resulting in potential permanent damage to our export market, creating a difficult trading environment.

Tax
Michael Noonan, Minister for Finance, has given assurances that there is no threat to Ireland’s 12.5% corporation tax rate as a result of Brexit.

Group structures
Most tax relief/reduction or preferential treatment is predicated on group companies being resident within the EU. The presence of a UK company within the group structure may lift tax neutrality on inter-group transactions and there may also be an increase in operating costs due to group companies operating in two different regulatory regimes and potential border controls.

Legal
There are a myriad of potential legal implications, EU law no longer binding, increased importance of governing law clauses, contracts overly reliant on EU definitions and/or principles, service of proceedings, cross jurisdictional insolvencies/mergers/divisions, application of TUPE provisions on the transfer of an undertaking competition law and enforcement of judgements in the future.

EU Directives/Regulations
Following the conclusion of the exit process, and depending on the nature of the future relationship between the EU and the UK, it may be that the UK is no longer bound by EU Directives and Regulations resulting in an almost insurmountable number of social, cultural, economic and environmental implications.

Northern Ireland
The implications for Northern Ireland are not yet known. There is a risk that the re-introduction of a border could affect the integration efforts in Ireland with risks to peace, cross border businesses and all cross-border EU funding which funds projects between the UK and Ireland including scientific, arts, film, transport links and cultural programmes. 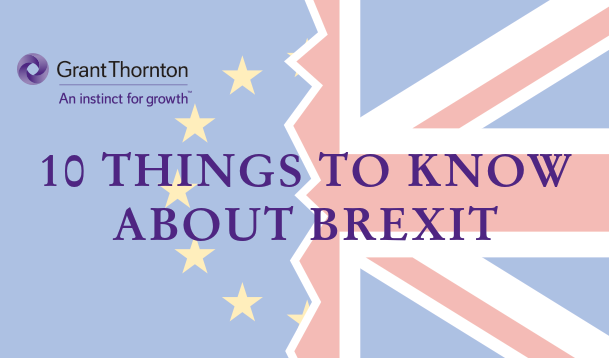