Running 5K a day for a year

Will McCann talks to us about his #5K4D Challenge and how it came about. 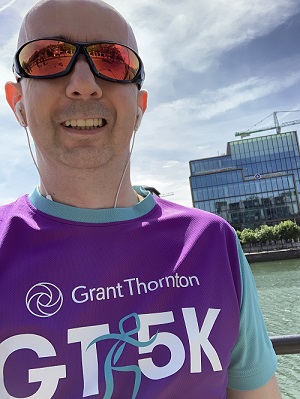 Back in early March, the Grant Thornton Corporate Social Responsibility (CSR) Committee had Amy and Joanne in from The Alzheimer’s Society of Ireland, Grant Thornton’s chosen charity partner, to give us an information session on the society, what they do and how they raise funds. With my mum having dementia, I  attended the session to learn more about Alzheimer’s., I knew they had previously done cycling events to raise funds, so at the end of the session I had a chat with Amy and Joanne and asked if they were doing any cycling events this year and was told they decided not to, as last year was low in numbers. I then discussed doing a number of Cycling Sportives to raise funds which they thought was a good idea, so I had a plan to cycle four events with a friend coming up in May and June.

Then the COVID-19 pandemic came about and ended my cycling plans! When the initial lockdown was announced on Friday 27 March, with movement restricted to 2km, I set myself a personal challenge to run 5K a day for the two weeks, as cycling within a 2km limit was very restrictive. On day three of my challenge, I had the thought of seeing if I could keep the running going for 100 days, on day four, this thought expanded to doing 5K a day for a year. This led to the idea  of raising funds for the Alzheimer’s Society while completing this challenge. On day five, I worked out the hashtag and tagline of #5K4D – 5K a Day for Dementia.

With the challenge set, and running not being one of my strong points, I decided to allow myself three weeks of running the daily 5K’s to make sure I was up for the challenge. Once I was happy that I could complete it, I reached out to the CSR Committee in Grant Thornton and Amy & Joanne in the Society to share my idea with them and find out their thoughts on it. After received very positive feedback from both, I launched the challenge on my 50 day mark, and set up an Every Day Hero page to allow people to donate and support my challenge. In all communications about the challenge, I have included a link to my Strava account so people can follow my efforts and I post up daily updates on Facebook and Instagram.

Initially I wanted to do this to keep myself active during lockdown, and now it has turned it to something much more meaningful. The support I have received has been incredible, with a number of my colleagues even joining me on the #5K4D challenge in preparation for this year’s Virtual GT5K. I’ve found that running with a goal is one of the best ways to take your mind off what is going on in the world at the moment, while staying fit physically and mentally. There is still a long way to go but all I can do is just take it 5K a day!

Find out more about Will's challenge and donate here