Brexit: The vote is in

By the early hours of Friday, 24 June, it was clear that history was about to be made and that the voting UK public had decided to end the UK’s 41-year membership of the EU. Many reasons were cited as fundamental to the decision, and can probably be reduced to a couple of main (perceived or otherwise) issues: disenfranchisement and a dislike for the apparent lack of democracy and independence created by the governing power of the EU.

The percentage margin makes the result look a far closer call than the numbers – with some 17.4m voters (a majority of 1.25m) in favour of leaving the EU. Given these numbers and the fact that the new UK Prime Minister, Theresa May has clearly stated that “Brexit means Brexit”, it appears to be a very remote possibility that the vote will be put back to the people or indeed that the UK Parliament will seek to overturn the view of the electorate.

Ireland’s focus should be on the factual reality that the UK has decided to exit the EU and how Ireland’s future – as its closest neighbour, with very significant trade links and intertwined history – will be shaped by the UK’s decision to sever ties with the EU. Ireland has a unique and historical relationship with the UK.

Indeed, it will feel the biggest impact amongst the remaining EU members with the most immediate concerns being trade, free movement of people and the position of Northern Ireland. The Irish Government have made it clear that Ireland’s intention is to preserve our close ties and relationship with the UK in so far as is possible.

Our document looks at the main implications of Brexit on Ireland. 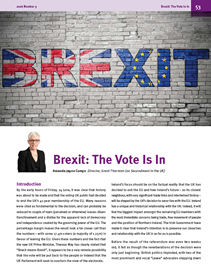